The psychographic characteristics of these market segments will be utilized for:

4 FOR EACH CELL, DEMOGRAPHICS, LIFESTYLE, AND COMMUNICATION PREFERENCES HAVE BEEN DETERMINED TO HELP DELIVER THE PROGRAM’S INTENDED OUTCOMES

THE FOLLOWING ARE HIGHLIGHTS OF LITTLE ROCK’S PSYCHOGRAPHIC CHARACTERISTICS

PORTRAIT OF A HIGH RISK HOUSEHOLD

THEY ENJOY A VARIETY OF SHOWS INCLUDING:

THE TOP TEN PERSONICX LIFESTAGE CLUSTERS MOST APPLICABLE TO PEOPLE LIVING IN RISK CATEGORY 5 VS RISK 1, 2, 3, REPRESENT 42.96% OF THIS GROUP

Insights on the top three clusters 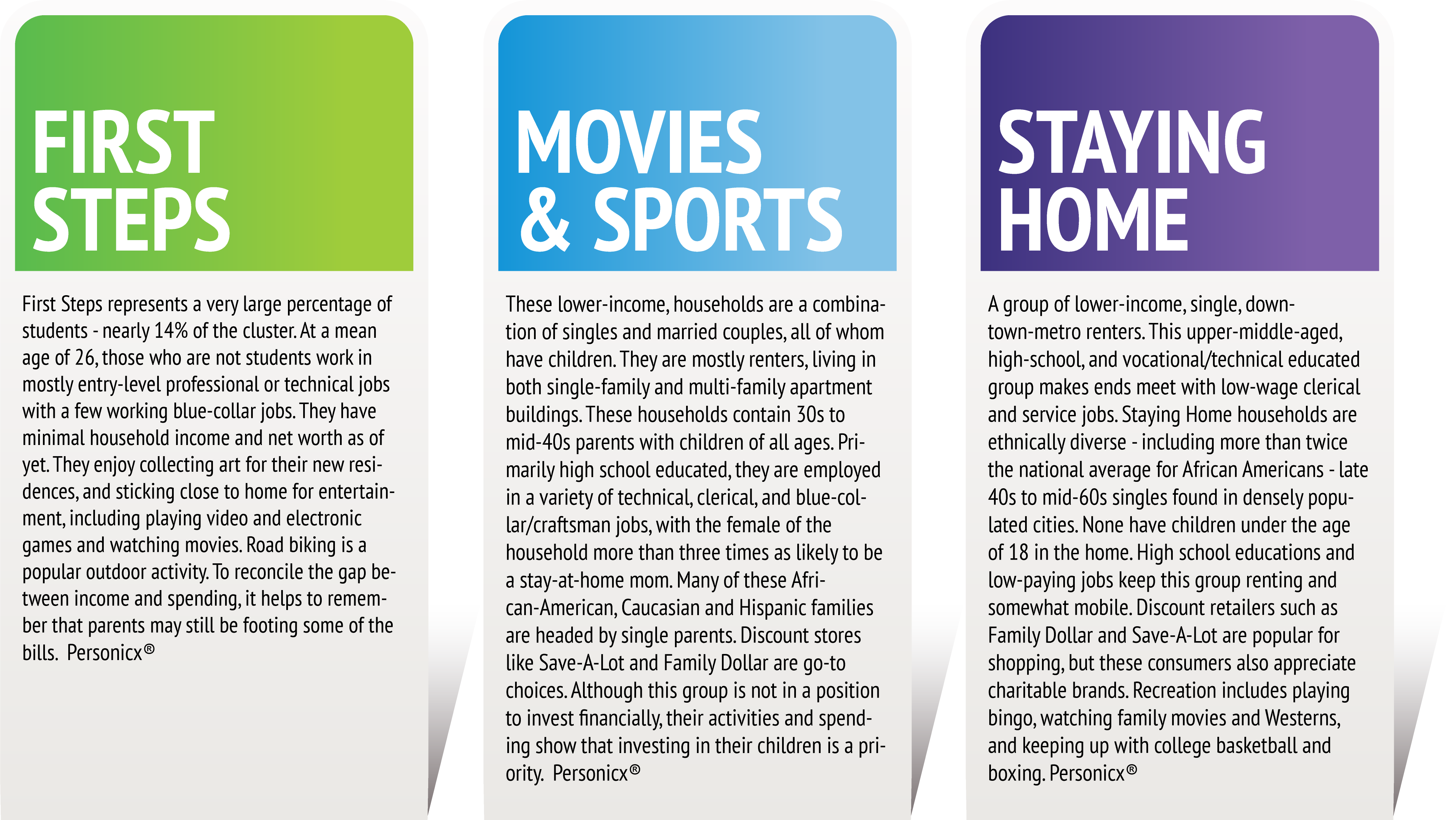 WHEN WE INCLUDE RISK CATEGORY 4 AND COMPARE 4 & 5 VS RISK CATEGORIES 1, 2, 3, WE SEE THE TOP TEN LIFESTAGE CLUSTERS COMPRISE 34.02 % OF THE GROUP REPRESENTED

WHILE THE FIRST AND LAST CLUSTER REMAINS THE SAME, THE SECOND CLUSTER HAS CHANGED 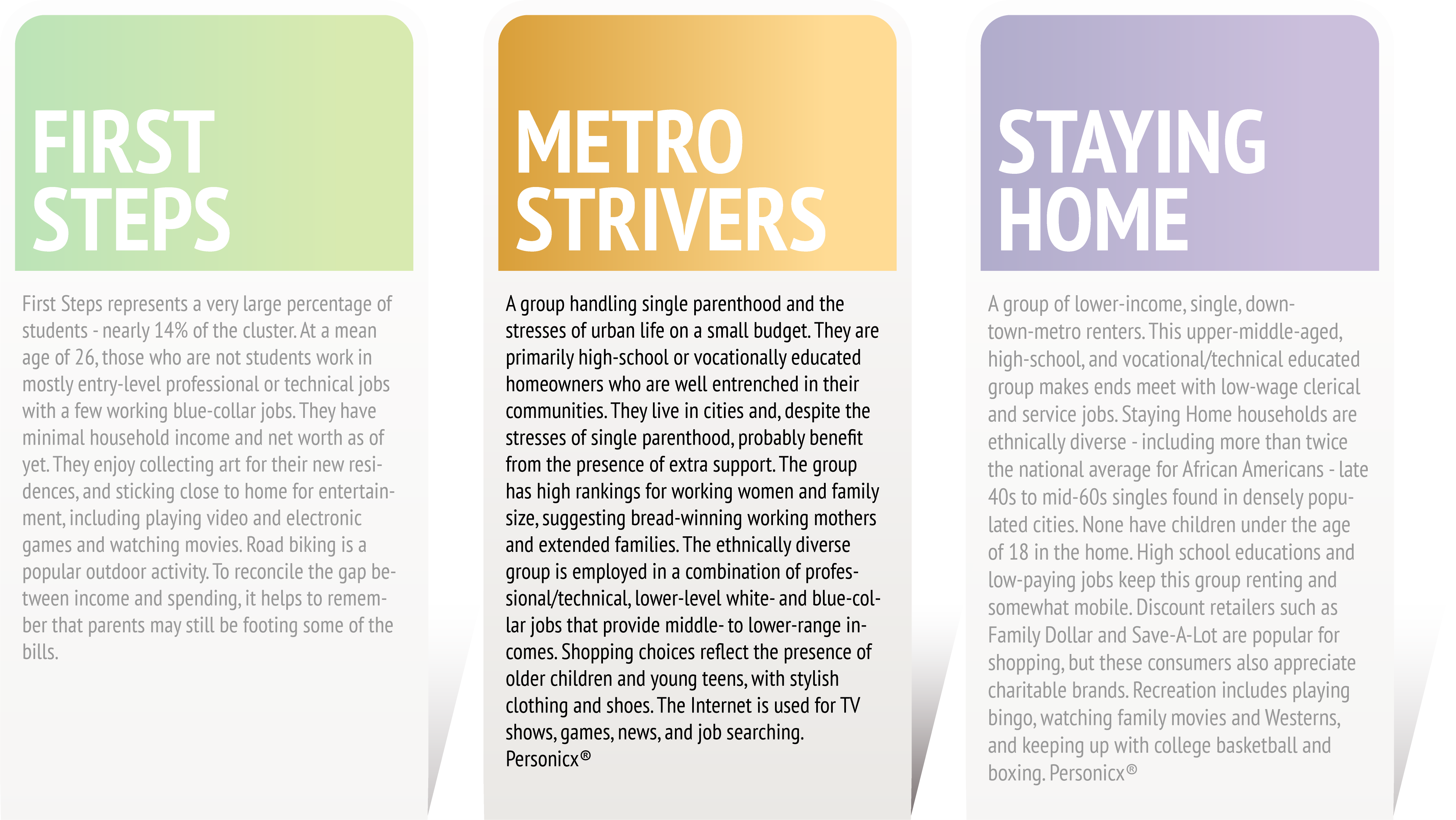 of our Psychographic Segmentation

At this level of granularity, the psychographic segmentation data is more reliable than census data and challenges assumptions that are commonly made with the use of census data alone

The relationship of poverty to spatial child maltreatment risk was evaluated in two ways, first via census poverty data extrapolated from the census block to the grid cell, and second, using psychographic data to define population demographics by grid cell.

Using census data, there was a weak correlation between child maltreatment risk and poverty. 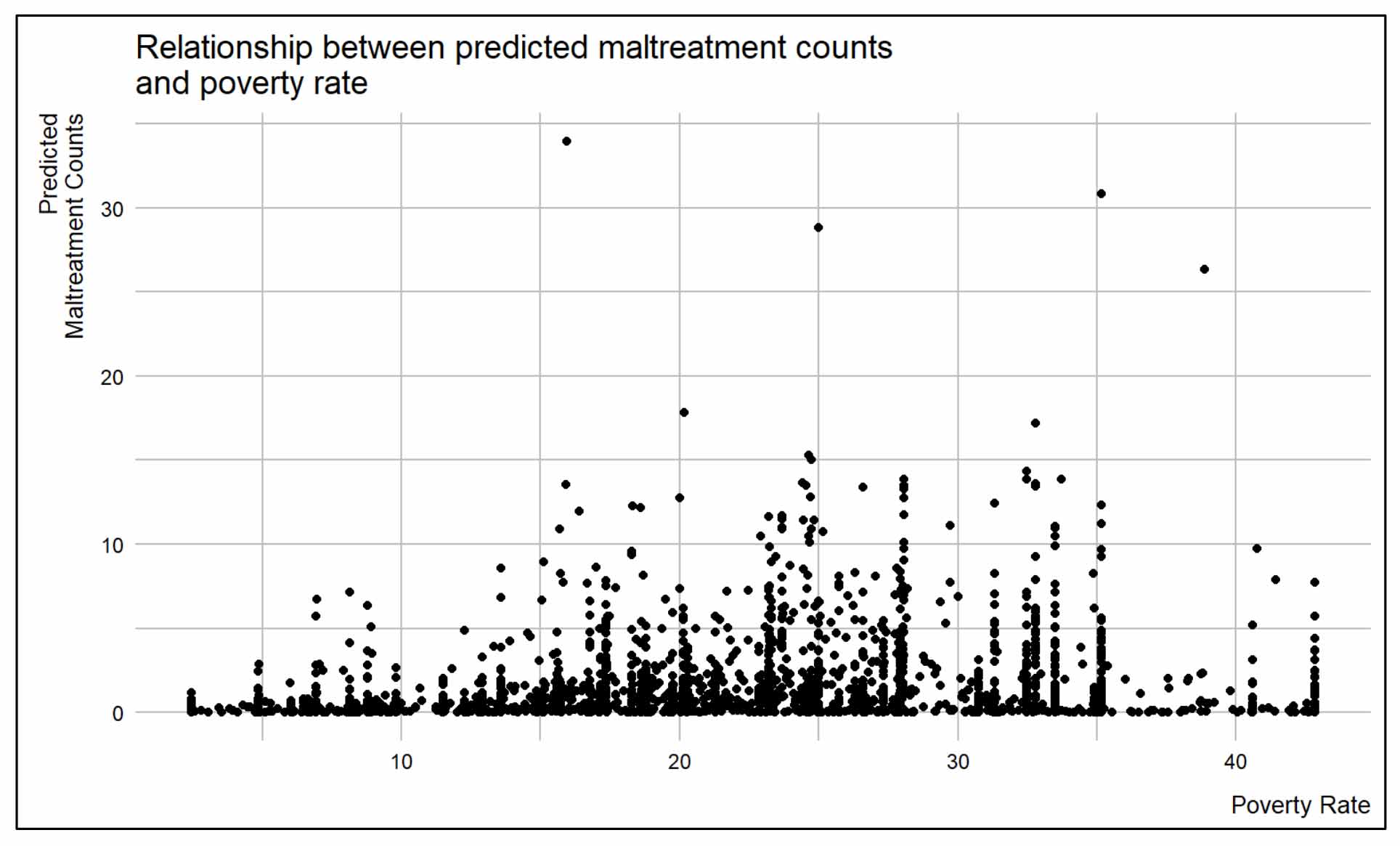 With psychographic data, the main differentiator for the highest risk category was extreme poverty.

These findings suggest that at a unit of analysis smaller than a census block, census derived poverty data does not accurately describe the relationship of poverty to spatial child maltreatment risk.

To improve spatial targeting of scarce prevention resources and basic needs supports, further research is indicated to identify the most accurate data sources at a unit of analysis smaller than a census block.

Risk category 5 over indexes on single mothers living in severe poverty with less than average interest in parenting. The hypothesis is that child fatality occurring in those areas are more likely to be attributable to neglectful supervision.

On the other hand, in risk category 4 where a male adult is more likely to be present in the household, the hypothesis is that more fatalities will be due to violence. If this is the case, the strategy for prevention would need to be approached differently for each location.

It appears that current Little Rock prevention campaigns are not aligned to the correct media channels for achieving the greatest impact or reach.